About The Age of Invention Authors

The masterminds behind the Age of Invention are Rev DiCerto and Duncan Eagleson. Duncan and Rev have written several works together, and a number of novels and stories individually. By the time Rev became the editor on Duncan’s novel Darkwalker, they had been friends for over twenty years, had each written several novels, had written one novel together, and were working on another. Fire Aloft and the Age of Invention are the culmination of nearly a quarter century of friendship, mutual critique, mutual cheerleading, and a buttload of hard work.

Below the bios, you’ll find links to the other works we’ve published. 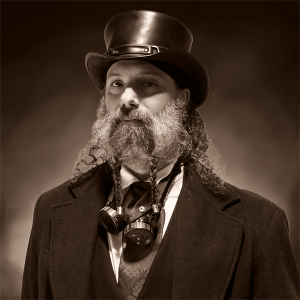 Rev DiCerto is a writer, musician, and editor. He lives in Johnson City, New York.

Rev is the author of a number of novels in the fantasy, urban fantasy, science fiction, and steampunk genres. His fantasy and urban fantasy work often centers around Norse mythology, which he as taught about at various gatherings and festivals. He has published numerous short stories in a variety of science fiction and fantasy anthologies. Currently, outside of his work on The Age of Invention, he is working on a set of books set in a dystopian future of out-of-control climate change, told as spaghetti westerns (kind of). Fire Aloft is his first published novel.

His favorite experience as a writer (aside from seeing Fire Aloft published) is having his short story “Animal Attraction” rejected by a horror publication. The rejection letter from the editor included the sentences “I absolutely loved this story” and “Unfortunately, it was just too disturbing for our publication.” (By the way, Rev doesn’t write horror.) “Animal Attraction” and its various sequels and spinoffs are tales of an unsavory Victorian-era scientist named Hobbes; they may appear on The Age of Invention website as bonus content in the future.

Rev's short story Losing Amelia, which appeared in the Decopunk fiction anthology (see below), was a 2016 finalist for the Sidewise Award for Alternate History.

As a musician, Rev wrote and recorded two CDs of original music with his former band, Sol Dog, and is currently writing the last few songs for a recording with a new group, Kindred Soul. In addition to songwriting, he is a lead singer and lead guitarist.

By day Rev works as a freelance editor. He has worked in the medical communications field for over a decade, and has recently begun taking on clients in the science fiction, fantasy, and steampunk genres as well. If you write, maybe he can help you mold your next project into shape!

After that, he typically goes to the gym.

Author, painter, sculptor, and award winning maskmaker Duncan Eagleson is also a former advertising copywriter, screen printer, private detective, actor, and stage combat choreographer. He is best known for his artistic contribution to Neil Gaiman’s Sandman series, his graphic novel version of Anne Rice’s The Witching Hour, and the masks he created for Wes Craven’s Cursed, the Big Apple Circus, the WWE wrestler Kane, and even the Smithsonian.

Duncan works days as a freelance illustrator and designer, creating book covers, film posters, comics and game art. He served as lead illustrator and art director on Evil Overlord Games’ Susurrus: Season of Tides, and most recently created the cover for Fire Aloft for Crossroad Press.

He has published several short stories in various anthologies, and Publisher’s Weekly lauded his tale “Snovhit” as having an “authentically ancient feel.” Of his first novel, Darkwalker, Charles deLint, writing in The Magazine of Fantasy and Science Fiction, said, “[Darkwalker] has everything you could want in a book: a fresh, individual voice; a mystery... a world that is familiar but still original... and a story that takes us from start to finish on the edge of our seat.”

Eagleson lives just outside Boston, and spends most of his time in his studio, surrounded by far too many drums, swords, books, and DVDs. He can be found online at duncaneagleson.com.

Other Books from Our Authors

A supernatural killer is stalking Bay City. City Boss Micah Roth summons the Railwalkers – an Order of warrior shamans – to hunt for the killer the newsfeeds have dubbed “The Beast.” Out in the Zones, Railwalker Wolf and his companions have faced mutants and madmen, animals and demons, but the Beast of Bay City is a predator the likes of which they’ve never seen before. To apprehend The Beast, Wolf will be called upon to face his own private demons, and plumb the depths of the mysterious darkness surrounding his own personal history.

We're part of the cover-up!
Did you know that there is a secret government agency dedicated to creating conspiracy theories? It's true! It's on Facebook!
But it's not in this book. Our conspiracy theories are all fiction. At least, that's what we want you to think! Certainly, we did invite fiction writers to weigh in on conspiracy theories. The result includes (of course) the Masons and dragons (David Clements), the Bavarian Illuminati (Debra Doyle and James D. Macdonald) and the New World Order Shariann Lewitt). There's also the Shaver Mystery (science writer Jeff Hecht), cell phones and weather control (Rev DiCerto), Atlantis and Lemuria (Paul DiFilippo), Roswell (H. Paul Shuch of SETI fame), mermaids (Cat Rambo and Mike Resnick), ancient immortals who guide our breeding (Steven Popkes), quality management (Allen Steele), and—of all things!—Santa Claus (James Cambias). Not to mention the squirrels (Sarah Smith).

DecoPunk: The Spirit of the Age

Are you ready for the next wave of Steampunk? Then it's time for something that captures the spirit of the twentieth and twenty-first centuries, an era of ebullient progress in the arts, literature, science, and technology. Call it Deco Punk, and let's rock with the bootleg Twenties and roll with the grim Thirties. It was a time of heady optimism, and-fittingly-the era when modern science fiction was born.

Thirty-one stories of disparate quality and tone put a new spin on old tales. James S. Dorr's "The Glass Shoe" is a lighthearted political parody of Cinderella; Michael Takeda's "The Wolf in Standard Ration Clothing" is even darker than the original Red Riding Hood. Amy E. Yergen's brilliant title story, a meditation on family and matrilineal legacies, easily brings Rapunzel into the modern world, while David Turnbull's folksy "The Blood Cakes"; Duncan Eagleson's Viking Snow White retelling, "Snovhit"; and Michelle Markey Butler's Arthurian intrigue, "Sovereynte," have an authentically ancient feel. Line drawings by Ciaran Gaffney and Jade Liebes enhance each story, and introductions offer insight into the writers' lives and inspirations. The wide variety means many transitions are jarring, but any fairy tale fan will find something to enjoy in this collection. -Publishers Weekly

An astonishing amount of the science and technology in vintage science fiction has come to pass. But an awful lot has not. Where's your invisibility suit? Your space train? Your very own personal robot?

But those old, never-happened ideas are still fun. For a fresh take on those old ideas, try Impossible Futures!

20 original stories enchant, intrigue, and delight as they explore the theme of "Elf Love" in a variety of genres: fantasy, suspense, romance, noir, humor, and much more.

Yes, there might be one of these in the Fire Aloft follow-up... ... See MoreSee Less

When this happens, it's usually because the owner only shared it with a small group of people, changed who can see it or it's been deleted.
View on Facebook
·Share

Share on FacebookShare on TwitterShare on Linked InShare by Email